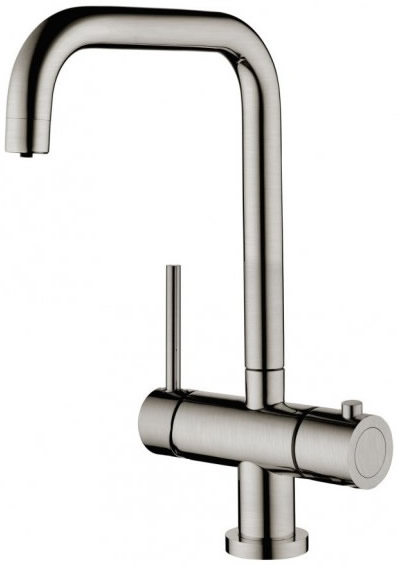 A brief introduction to 3 in 1 Instant Boiling Water Taps

Instant boiling taps, hot taps or kettle taps as they are sometimes referred to, have been around for a very long time and the principle of holding a reservoir of near to boiling water was the source of hot water for many homes that didn’t have running hot water and just had a cold feed in the last century.

In recent years, the technology, regulation and indeed fashion or move to greater kitchen convenience has resulted in people installing an added hot tap to sit alongside the existing kitchen mixer tap that provided normal hot and cold water primarily for domestic chores. Our 3 in 1 instant boiling taps operate like the mixer tap but also have boiling filtered water through the same spout to conveniently make hot drinks or start the cooking process so that the ‘bring to the boil’ stage in most recipes, is there in an instant. With over 100 cups per hour and no ‘spitting or spluttering’ that is associated with many instant hot taps, our selection of 4 variations of 3 in 1 taps ( 2 styles and 2 finishes) will be the talk of the neighbourhood.

The beauty of the 3 in1 and 4 in1 ‘vented’ taps is that there is no need to drill another hole in the work top and the solution can be installed by an unqualified person. ‘Vented’ means that the water is not kept under pressure and so can also be used on new build properties or in places where regulations would otherwise exclude a ‘pressured system’.

High quality standards for your drinking and cooking

All of our taps are designed to work, and come complete, with a special filter that will result in you drinking or cooking with the finest filtered water to ½ micron that removes all particulates, lead, asbestos and waterborne parasites such as cryptosporidium.

The application of the latest technology has resulted in a tank that is designed to minimise the time it takes to heat and maximise or maintain the heat of the water to reduce energy costs, digital controls that enable the chosen temperature to vary to your preference for example for tea drinkers between 77 and 98 degrees centigrade. The tanks are also very accurate and so unlike analogue ( dial controlled) tanks that can be up to 5 degrees out they switch on and off as soon as the water temperature in the tank varies by ½ a degree.

Designed and developed by McAlpine with safety paramount

We are very proud of our taps which have taken years of development and significant expertise from the well renowned McAlpine family. Safety is a key consideration for many, and given that in the UK, the Child Accident Prevention Trust says more than 6,500 under-5s have to go to A&E departments each year because of scalds from kettles and spilled hot drinks, we have made our taps as safe as possible. Notwithstanding that the hot water is held securely in a closed tank and delivered through a fixed spout at the back of work top, out of the reach of children and cannot be pulled by a cable or spilled in any volume; the taps themselves have further safety features. Instant boiling water cannot be left running as it has a ‘spring-back’ action to turn it on and the spout is insulated to prevent it overheating whilst it dispenses a lot of high temperature hot water.

There is a lot more product information in our frequently asked questions section and in the details section for each tap but we think that you will find that our WRAS and CE approved taps and tanks and our WRAS and NSF approved filters provide the very best of design technology and innovation for instant boiling taps in the UK at the moment, rivalling any of the major brands that you’ll be familiar with, hence our 2 year warranty and exceptional low prices.

Our 4 in 1 touch control tap also delivers filtered cold water to drink and our Ozone taps provide the very latest sanitization technology for water that will soon replace bleach as the household cleaning solution of choice, launching soon in 2019.

Our shop isn’t always staffed so please call ahead to make an appointment prior to visiting.